Coming up on this weeks extremely packed show, in the cinema section Vince Vaughn and Owen Wilson join Google as a part of The Internship, Jesse Eisenberg and Woody Harrelson form part of the four horseman in magic crime thriller Now You See Me, Gerard Butler teaches surfing in true drama Chasing Mavericks and we find out what the band Pussy Riot really did in documentary Pussy Riot: A Punk Prayer. On DVD/Blu-Ray we take a look at Ben Wheatley’s latest mind bending film A Field In England, Jason Statham stars in action thriller Parker, Josh Duhamel stars in romantic drama Safe Haven, Chris Hemsworth forms an alliance against an invading force in the remake of Red Dawn, Tim Roth and Cillian Murphy star in tough British drama Broken, Martin Compston stars in true life drama about Paul Ferris in The Wee Man, David Duchovny and Vera Farmiga star in comedy Goats and Mads Mikklsen and Alexander Skarsgard stars in revenge thriller Exit, plus as usual our TV movie of the week, as well as the latest movie news, UK box office top 10 & DVD/Blu-Ray top 10.

Join us live from Monday 7th July at 7:30pm (GMT) on our Spreaker page or the Spreaker app (which you can download free from the Apple app store/Android marketplace and find us on by just searching for The Monday Movie Show). Don’t forget you can also catch up with any episode of the show on iTunes, Spreaker or you can now find us on Youtube, just search for the Monday Movie Show.

Well nothing could move OZ the Great and Powerful off the top spot as he has managed to hold on for another week, not that he had much competition as this weeks 10 films were down 51% on the films this time last year.

There were 3 new films in the top 10 however none of them made much of a splash  The lowest of the new entries went to the remake of Red Dawn which could only manage to hit the number 8 spot, doing slightly better by going in at number 6 was The Incredible Burt Wonderstone.  This weeks highest new entry though went to thriller Welcome to the Punch which hit the number 3 spot.

One quick note one of last weeks new entries, action film Fire with Fire only went in at number 33 when it came out however on it’s second week of release it did even worse by dropping all the way down to the number 77th film.

New releases – you have a very interesting selection of new films on offer this week to go and see.  First off is animated films The Croods which has done very well so far on it’s preview weekend taking a estimated £1,7 million, your next film choice is Identity Thief which was a huge success in the US and your finally big film of the week is Jack the Giant Slayer which bombed on it’s release over in America.  You also have 2 smaller movies in the form of action film Stolen starring Nicolas Cage and thriller Compliance.

Coming up on this weeks show, in the cinema section we review James McAvoy and Mark Strong in action thriller Welcome to the Punch, Zac Effron is The Paperboy, Steven Carell is The Incredible Burt Wonderstone and action thriller remake Red Dawn.  On Blu-Ray/DVD we take a look at French drama Amour, Jake Gyllenhaal and Michael Pena star in End of Watch, we return for a second viewing of Silent Hill in Silent Hill Revelation, the found footage film get’s under your skin with The Bay, Kevin James stars in comedy Here Comes the Boom, children’s comedy Fun Size and Horror film 247 degree Fahrenheit, plus as usual our TV movie of the week, a look at the latest movie news and the UK Box Office and Blu-Ray/DVD top 10′s.

Join us live from 7:30pm (GMT) on Monday March 17th on our Spreaker page or the Spreaker app (which you can download free from the Apple app store/Android marketplace and find us on by just searching for The Monday Movie Show). Don’t forget you can also catch up with any episode of the show on iTunes, Spreaker or you can now find us on Youtube, just search for the Monday Movie Show.

Not only has last weeks number 1, Hansel and Gretel Witch Hunters been knocked off the top spot but it has been given a good kicking and is no longer in the top 5.

4 new films graced this weeks chart, first off going in at number 7 was comedy film The Guilt Trip.  Hitting the number 4 spot was action thriller Parker starring Jason Statham, doing better however was Steven Soderbergh’s finally Side Effects which managed to find it’s way to the number 2 spot.  This weeks highest new entry and the new number 1 went to Sam Raimi’s OZ The Great and Powerful.

New Releases – Not a huge week when it comes to new films but if your after something new to watch then the films on offer are, thriller Welcome to the Punch, comedy film The Incredible Burt Wonderstone, action remake Red Dawn and very strange thriller drama The Paperboy. 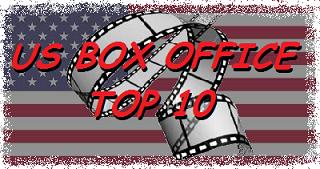 It will come as no surprise to anybody to find out that The Hobbit, this weeks only new entry went straight into the number 1 spot bringing the reign of Skyfall too a end.

New Releases – lot’s of new films too choose from this week so i will quickly go over just a few.  Your first film of choice is the re-release of animated film Monsters Inc however this time it’s in 3D.  If your after a comedy film then you have two too choose from, first off is The Guilt Trip and your second choice is This is 40.  Your final movie pick for this week and also this weeks biggest new release is Jack Reacher starring Tom Cruise.

Sorry for the lack of a box office top 10 last week, that was my fault.

Anyway on to this weeks chart and despite a 1 week absence from us very little has changed as the top 2 films have remained the same, with Twilight still sitting a top the chart tree.

only 2 new films entered this weeks chart, first off going in at number 10 was horror film the Collection, the highest new entry went to Killing Them Softly which entered the chart at number 7.

New Releases – only one film of any note is out this week so don’t think that next weeks chart will change that much.  Your only new movie of choice is romantic comedy Playing for Keeps

Last week i predicted that Skyfall would only spend one week at the top of the chart and i was right as it has been knocked off by this weeks only new entry.

As said above there is only one new entry in this weeks chart and that’s gone to Twilight Saga: Breaking Dawn Part 2 which has gone straight into the number 1 spot.

New Releases – Finally a week where you have more than one new film to choose from, in fact you have 3 big films on offer.  First off is the remake of Red Dawn which has been sitting on the shelf for so long in might of gone off, your second choice is Ang Lee’s latest film The Life of Pi, your final choice of the week is animated film Rise of the Guardian.

A group of teenagers look to save their town from an invasion of North Korean soldiers.

First Impression: This film has been in movie hell like a previous Chris Hemsworth film and too me it look’s like it could be a fun action film, yes it’s another remake of a 80’s film but let’s hope it’s much better than the Australian version Tomorrow When the War Begins.